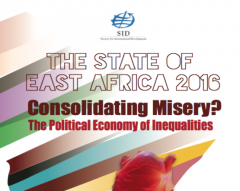 "People do not eat GDP: Even as the economies of EAC member states have been recording considerable growth rates, this growth has been accompanied by a growth in inequality in virtually all countries."

This is the one of the key observations of the State of East Africa Report 2016 published by the Society for International Development. GDP figures (with a regional annual average increase of 6% since 2011) tell the story of an economic expansion that has taken place in East Africa in the last few years alongside significant structural changes and greater sophistication in the countries’ economies. This GDP growth has generated optimism and greater confidence that the region is going places.

In spite of the growth, the economic boom has not generated the jobs or prosperity for all that it was expected to. The levels of poverty, hunger and malnutrition in these countries still remain staggeringly high.

Building on previous reports, this State of East Africa Report examines the political economy of inequalities and highlights the relationship between politics and inequality. The report offers some hypotheses as to why inequalities persist and why efforts to address them are unlikely to be successful in the absence of a committed attempt to dismantle and recreate the institutions that distribute power and the networks that have emerged to extract benefits from them.

The report analyzes nine sectors divided across economic, social and political pillars, and for each of these sectors it asks questions about the EAC Member States’ performance in the fiscal, normative and ethical domains. The report explores some of the challenges that the region will need to face up to transform its economies successfully to ensure that the majority of citizens have an active stake in change processes of the day so as to benefit further from the ongoing integration processes. It also highlights some areas of possible intervention, as points of departure for policy conversation, keeping in mind that the complexity of these interventions will require a deeper analysis and broader conversation.