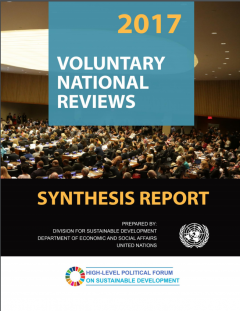 The 2017 meeting of the High-Level Political Forum on Sustainable Development (HLPF) took place from 10 to 19 July. A total of 43 countries presented voluntary national reviews, up from 22 countries that presented inaugural reviews at the 2016 HLPF. With this, more than a third of countries will have conducted a voluntary national review, sharing progress, experiences, lessons learned and challenges in implementing the 2030 Agenda. Looking ahead, at the 2018 HLPF, 48 countries will present their national reviews. Three of these will be conducting their second review at the HLPF (Colombia, Egypt, and Switzerland) and one country its third (Togo). This report synthesizes some of the findings of the VNRs, drawing from the written reports. As in the synthesis of the 2016 VNRs, the report uses a theme-based analysis drawn largely from the voluntary common guidelines contained in the Annex to the SecretaryGeneral’s report on critical milestones towards coherent, efficient and inclusive follow-up and review at the global level (A/70/684). This synthesis report examines the efforts of reporting countries to implement the 2030 Agenda, including challenges, gaps, achievements and lessons learned.

The high quality of the national reports reflects the effort that the 2017 VNR countries have invested in the preparations for the HLPF. It is evident that countries have built on the solid foundations of the inaugural reports, while adding new and innovative elements.