Who is paying the bill? (Negative) impacts of EU policies and practices in the world 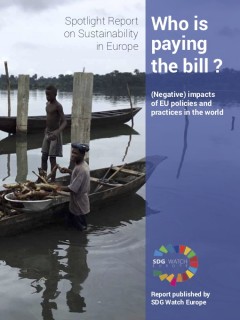 Studying EU policies thoroughly means studying policies of externalization. The thirteen chapters assembled in this publication constitute an impressive – impressively gloomy though – evidence for this assertion. Wherever you turn your eyes, whatever policy domain you may be concerned with: What at first glance may seem to be part of the European Union’s internal policies immediately turns out to be a story of externalities, a matter of spill-over effects transcending the borders of the European polity. And more often than not it is negative externalities that come into sight. Negative externalities that we should be talking about instead of obsessively trying to ignore them.

Externalization is a complex phenomenon. It is a combination of the social processes of appropriation, exploitation, devalorisation, externalization (proper), closure, and suppression. Externalization begins with one party, often forcefully, appropriating resources, most importantly labour and nature, by way of expropriating people and land elsewhere in the world. The appropriated resources are then exploited in order to extract economic profit from them, a profit that systematically accrues to the appropriating party only. Appropriating and exploiting other people’s labour and other places’ nature, however, is made possible by effectively devalorising them, i.e. by denying that labour and land elsewhere have a price to be paid or by implying that they are not as precious and valuable as the labour and land of one’s own homeland. Externalization in the narrow sense of the word then means that the costs of the devalorising appropriation and exploitation of others’ resources have to be borne by these others themselves – while the winners of the game succeed in closing their economic and social space against the outer world, preventing to be confronted with the consequences of externalization. Finally, this whole arrangement is made invisible, is being suppressed from the externalizers’ collective consciousness – out of sight, out of mind.

This is actually why the work of SDG Watch Europe is so important. This is why this publication on the spill-over impacts of a wide range of EU policies is so indispensable: It sheds light on the nexus between the political regulation of production and consumption here, in the European Union, and the living conditions of people elsewhere, in the supposedly ‘underdeveloped’ countries of the Global South. People that seem to be living far away, but which are actually pretty close to us, because their life chances are heavily and often immediately determined by the European way of living, of producing and consuming – and of doing politics.

This publication contributes to unsettle the double standard of EU policies, consisting in protecting our own industries, corporations, workers, and consumers by confining the opportunities and threatening the well-being of economies and populations in other parts of the world. Every single of the following thirteen chapters is a strong and profound case for ending this double standard of European policy-making. They point to the pressing political need for taking responsibility, to acknowledge that it is others who pay the cost for ‘our’ success – and that this is a moral burden we, the European citizens, should not be willing to bear any longer.