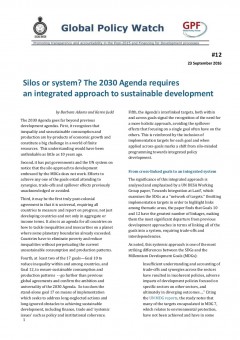 By Barbara Adams and Karen Judd

The 2030 Agenda goes far beyond previous development agendas. First, it recognizes that inequality and unsustainable consumption and production are by-products of economic growth and constitute a big challenge in a world of finite resources.  This understanding would have been unthinkable as little as 10 years ago.

Second, it has put governments and the UN system on notice that the silo approach to development embraced by the MDGs does not work. Efforts to achieve any one of the goals entail attending to synergies, trade-offs and spillover effects previously unacknowledged or avoided.

Third, it may be the first truly post-colonial agreement in that it is universal, requiring all countries to measure and report on progress, not just developing countries and not only in aggregate or income terms. It also is an agenda for all countries on how to tackle inequalities and insecurities on a planet where some planetary boundaries already exceeded.  Countries have to eliminate poverty and reduce inequalities without perpetuating the current unsustainable consumption and production patterns.

Fourth, at  least two of the 17 goals—Goal 10 to reduce inequality within and among countries, and Goal 12, to ensure sustainable consumption and production patterns  — go further than previous global agreements and confirm the ambition and universality of the 2030 Agenda.  So too does the stand-alone goal 17 on means of implementation which seeks to address long-neglected actions and long-ignored obstacles to achieving sustainable development, including finance, trade and ‘systemic issues’ such as policy and institutional coherence.

Fifth, the Agenda’s interlinked targets, both within and across goals signal the recognition of the need for a more holistic approach, avoiding the spillover effects that focusing on a single goal often have on the others. This is reinforced by the inclusion of implementation targets for each goal and when applied across-goals marks a shift from silo-minded programming towards integrated policy development.