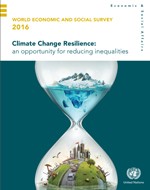 The Survey builds upon the recognition that  climate change and inequalities are locked in a vicious cycle: climate change triggers hazards which put at greatest risk the poor, the vulnerable and the marginalized—population groups already excluded from socioeconomic progress. In order to prevent climate change from exerting further devastating impacts, countries will have to close the development gaps that leave people and communities at risk.

The Survey argues that only far reaching, transformative policies will be effective in building climate change resilience and that the best adaptation policies are those that simultaneously address immediate vulnerabilities and the root causes of inequalities. To the extent that adaptation efforts largely involve investment in public goods, the public sector has a leading role to play.

Effective policy implementation requires coherent, flexible and participatory policy systems informed by integrated assessments to account for the different dimensions of development. Furthermore, increased public financial resources (both domestic and international) will be necessary to fill the gap in areas where the private sector is unlikely to invest, particularly in projects aimed at building resilience among the most marginalized areas and population groups.

A strengthened Global Partnership for Sustainable Development has an important role to play in supporting countries’ efforts to build climate change resilience, including through a substantial increase in funding for adaptation and in building the information systems and technical capacities to support policy implementation.

The report was prepared by UN DESA’s Development Policy and Analysis Division, based on inputs, data and information provided by a network of contributors inside and outside the United Nations System.