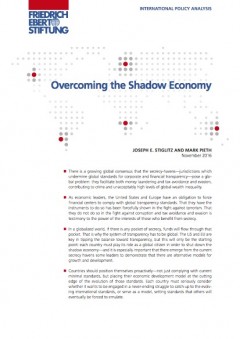 There is a growing global consensus that the secrecy-havens—jurisdictions which undermine global standards for corporate and financial transparency—pose a global problem: they facilitate both money laundering and tax avoidance and evasion, contributing to crime and unacceptably high levels of global wealth inequality.

As economic leaders, the United States and Europe have an obligation to force financial centers to comply with global transparency standards. That they have the instruments to do so has been forcefully shown in the fight against terrorism. That they do not do so in the fight against corruption and tax avoidance and evasion is testimony to the power of the interests of those who benefit from secrecy.

In a globalized world, if there is any pocket of secrecy, funds will flow through that pocket. That is why the system of transparency has to be global. The US and EU are key in tipping the balance toward transparency, but this will only be the starting point: each country must play its role as a global citizen in order to shut down the shadow economy—and it is especially important that there emerge from the current secrecy havens some leaders to demonstrate that there are alternative models for growth and development.

Countries should position themselves proactively—not just complying with current minimal standards, but placing their economic development model at the cutting edge of the evolution of those standards. Each country must seriously consider whether it wants to be engaged in a never-ending struggle to catch up to the evolving international standards, or serve as a model, setting standards that others will eventually be forced to emulate.